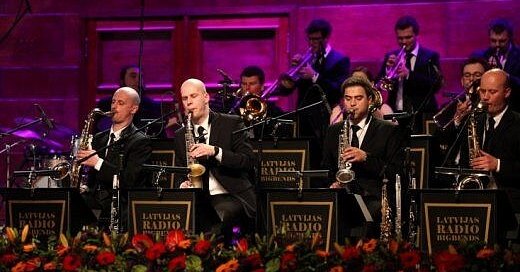 Māris Briežkalns music festival "Rīgas Ritmi" during the silent period was looking to create projects with bigbend's participation, but the youth big band school was created by the current musical director of the Latvian Radio Big Band Karlis Vanags, who in big made it possible to maintain a high enough level in Latvia and restore the great tradition of jazz music with professional power. Five years ago, the Latvian Radio Big Band, with the support of Maestro Raimonds Pauls and Māris Briezkalns, finally finally officially rose from the ashes and did it with a respectable amount of Phoenix's magnificence. Followed by the very rapid attraction of professional musicians, repertoire creation and collaborations with world-class jazz music stars.

This background is an important context for what big band  are doing right now. And starting from last year, it has begun to take steady steps towards further development, enabling local composers and arranger to assert themselves in big band music stylistics. Here's the story of the "Latvian Jazz Festival". Once again, we have to say "resumed", as this tradition was started back in 1965 by Maestro, creating the "Impressions" of the jazz trio, and two years later, creating the "Black Colors" banner with the orchestra. But last year the "Latvian Jazz Suite" was revived in new colors, first giving the opportunity as composers and arranger to prove themselves to big band musicians Maris Jēkabsons, Karlis Vanags and Viktors Ritovs.

The project turned out to be very successful, followed by a logical continuation - "Latvian jazz suite vol.2". Even more courageous, we could even say the avant-garde musical offer, which gives the whites to young composers and artisans Matīss Čudars, Krists Auznieks and Rūdolfs Macats.

It must be acknowledged as a rather daring step, which many will most likely not really understand. That is, it's about the stereotype that has been adopted, what should sound like the so-called "big band music". There is no more memory in the new disc since so usual swing. This is a trendy work in which big band stepped out of the comfort zone with a wide step and challenge not only the listener but also himself. And it's great because it confirms an important aspect - the Latvian Radio big band is not only capable of collaborating with world-class jazz music stars at the highest level, but also to provide musical enjoyment to the more thirsty innovators.

Times are changing and need to change with them. This, of course, does not mean that Big Band should play only contemporary avant-garde pieces, but the "Latvian Jazz Suite Vol.2" confirms that the future of the Latvian Radio Big Band is also possible. When high professionalism is already proven as almost self-evident, the desire and the idea to move on to new horizons is set to the forefront. "Latvian jazz suite vol.2" is the new horizons, whether it's like it or not. And it is only to be congratulated that thanks to the arrangement of the jazz educational system in the beginning of this century, Latvia in this music industry has objectively stood in front of its northern and southern neighbors of the Baltic, creating new, completely different thinking professionals such as Matīss Čudars, Krists Auznieks and Rūdolfs Macats .

Matīss Čudars offers youthful fervor, already in the first piece of the album, which is also called "Youth", creating uneasy musical performances or even a cinematic feeling, and not having to give the main role to his favorite musical instrument - the guitar. This is followed by a dissonant ambience called "Pirti" and apparently touching humanly deeper feelings of self-purification, but "Vermanes Garden" is already a more violent piece, which could really be played at somewhere not in city celebrations in the Vērmandāra stage.

As the next new jazz sacred name was given to Krists Auznieks who reflected on the God, Nature and the Work, first put "Work". It's a nine-minute-long epic with a rhythm of inspiration and a rather cinematic worker's sense of dignity. "God," in turn, challenges silence before the storm, which begins only in the third minute, further underlining the possibilities of artistic picking in contemporary big band music, but "Nature" is already a rhythmically pulsating and even a bit industrial piece.

The most ambitious and exuberant soundtrack from the second-party composer is Rudolfs Macats, who offers "Dedication to the Sea of ​​God", from the "Wisdom Line", which grows to a smaller instrumental structure, and the ending of a sunny album with the rhythm of the tune-up and ghastly saxophone "Sun's Children".