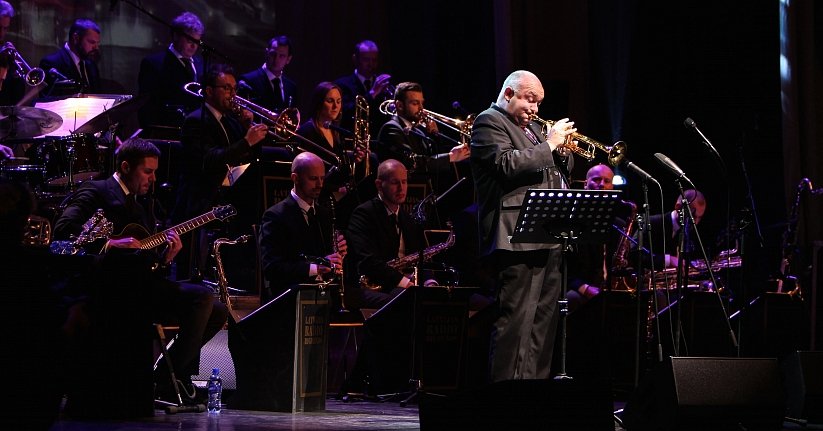 During the project Latvian Radio Big Band focuses on the Latvian folklore. Project implemented in Riga as in the European Capital of Culture or within the framework of “Riga 2014”. Program is created of more than 10 unique compositions performed together with the Australian multi-instrumentalist James Morrison who is the arranger and the author as well. James Morrison has visited Latvia in 2006 during the festival “Rigas Ritmi” and is pleased to come back with a new program.

James Morrison is a great storyteller, doing this the best with the assistance of music – he is an outstanding musician, performer, and adventurous Australian who knows how to live his life the fullest!

James Morrison master’s various musical instruments – trombone, flugelhorn, saxophone, piano, and contrabass – however, he is known the best as the trumpetist. He is the most known and popular jazz musician from Australia, who became popular at the age of 16, with the spectaculous performances in the USA. Morrison has performed together with London Symphony Orchestra, as well as in the special concerts for the Queen Elizabeth II and the presidents of the USA. Even more – he has been accepted in the Hall of Fame “Allans Billy Hyde Graeme Bell Hall” for his achievements in jazz music, as well as been elected to be an Artistic Director for the Cleveland Music Festival. In 2013, Morrison has conducted the largest orchestra in the world – composed by 7224 participants.

„James Morrison is a phenomenal musician – there is no doubt! The highest tops of fame and professionalism that could be reached with some difficulties even for the most talented musicians, James achieves without any special effort. For him the instrument play is the same as breathing and walking for us – the mortals. He just does it!” – British Trombone Society.